Below, a few examples of ecomods, i.e. modifications of digital games with an explicit or implicit thematic connection to environmental communication, are included. The were selected to show how modifying different games lends itself to tackling more micro-, meso- or macro-level issues, and how they can contribute to enriching our social imaginaries of sustainable futures. 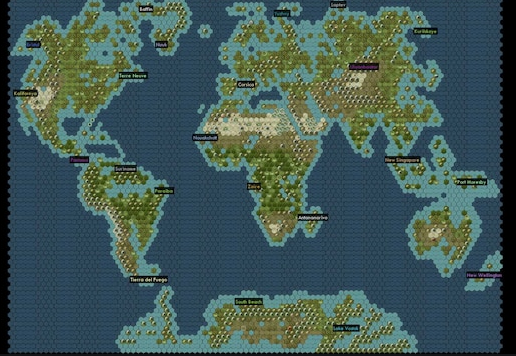 This map mod (i.e. a modification of the original game’s world map) of Civilization V depicts how Earth might look like after a dramatic rise of the ocean levels world-wide, and which political, economic and social ramifications this changed topography might bring with it. In the mod’s alternative future scenario, it has taken centuries, but Earth’s environment has finally stabilized after the worst case predictions of climate change came to fruition. There are no ice sheets left. The average global sea level has risen 110 meters, revealing much of the world that was previously uninhabitable, but flooding a great many places, including entire countries and most of mankind’s cities. Every continent is an island. The original civilizations have been replaced by 11 fictional factions to suggest how the balance of power might shift in this new world. The map is inspired by Chris Wayan’s Dubia world on his Planetocopia site and is based on real, though not professional, climatology.

The Alora is a building mod, i.e. one of several custom-designed houses in The Sims 4 that are optimized to be eco-friendly and self-sufficient, i.e. to support ecological lifestyles. The mod-makers describe the rationale behind designing the house and the ideal backstory they envision for it (this type of world-building is purely make-belief, though, i.e. does not have any tangible effect on the gameplay). From the website: “The Alora is a tiny modern home, that’s right not house —home. It was built for a young couple, individual Sim, or a retired couple looking to settle down in a modern environment yet affordable and is cheaper in the long-run. When buying the house, it may seem a bit expensive at a cost of §63,696 (§13,783) but after a week or so, you’ll start to realise that the solar panels and wind turbine seem to make a really big difference in your bills and this is why it is eventually cheaper!”
The mod uses the “Renault Eco Pack” from the EA Store, i.e. another modification with sustainability-themed content that was created in collaboration with car manufacturer Renault.

Ecology Mod is a Minecraft mod that makes players care about consequences of their technical development in the game. The mod adds an environmental pollution system with pollution sources and effects. Tile Entities and mechanics from Minecraft produce pollution, which accumulates in chunks and spreads. Pollution sources include e.g. the furnace, open fire, explosions and rubbish (i.e. dropped items). As the pollution accumulates, it triggers various pollution effects, such as smog (a thick poisonous fog), food pollution (food poisoned by the pollution), extinction of animals/fish, the death of trees or acid rain. Pollution also can be reduced by negative pollution sources, such as growth of trees and tree leaves. 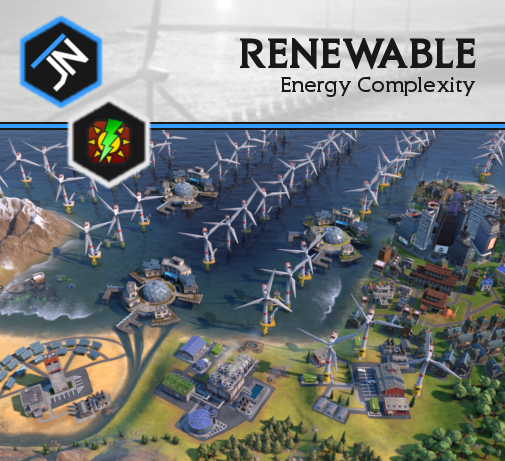 This mod alters and expands on the gameplay of the original Civilization franchise instead of the world map; it is different e.g. from Earth After Climate Change above in that it requires the Gathering Storm expansion, which in itself added ecological elements like environmental pollution and natural disasters to the game. Thus, the mod ‘responds to’ and comments on these additions by tweaking game rules and parameters. According to the author, “Renewable Energy Complexity makes everything about renewable energy in the late eras more engaging and rewarding”, i.e. players “receive more green electricity with smart placement of improvements and transfer that green electricity to other cities (or even other civilizations)”. The mod claims that renewables in the original expansion are too inconsequential to be used much; in the mod, “each improvement [still] starts out weak but is unlocked earlier and can generate more power than before with new technologies and the right placement”, which gives players more options in using them strategically and frames renewable energy as a more viable solution.