While computer games for educational purposes have been actively discussed in academic contexts for years, the ‘renaissance’ of board and card games has provided new opportunities for ecoplay using different media modalities and design affordances than digital games. Below, a few examples from our mediography have been included as inspiration. 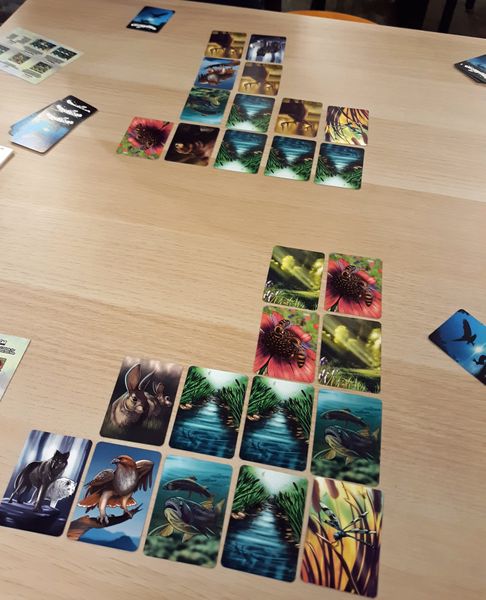 Ecosystem is a card-drafting game in which players choose cards and place them into their play area turn by turn. The cards in a player’s grid make up their own personal ecosystem, and at game’s end, a player will have twenty cards in their ecosystem, with the game including eleven types of cards. Bears score by being placed next to bees and trout; trout score by being placed next to streams and dragonflies; and streams are compared at the end of the game, with the player who has the largest stream earning points. 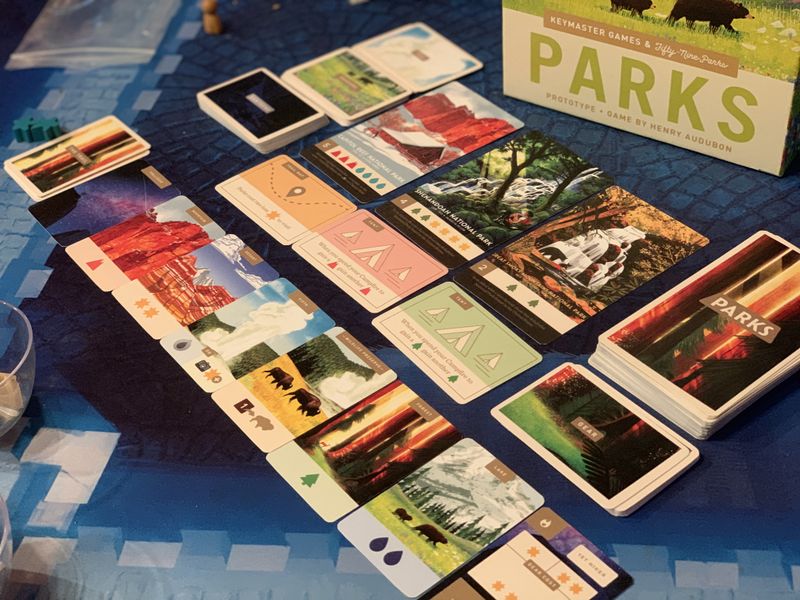 PARKS is a celebration of the US National Parks featuring illustrious art from Fifty-Nine Parks. In PARKS, players will take on the role of two hikers as they trek through different trails across four seasons of the year. While on the trail, these hikers will take actions and collect memories of the places your hikers visit. These memories are represented by various resource tokens like mountains and forests. Collecting these memories in sets will allow players to trade them in to visit a National Park at the end of each hike. 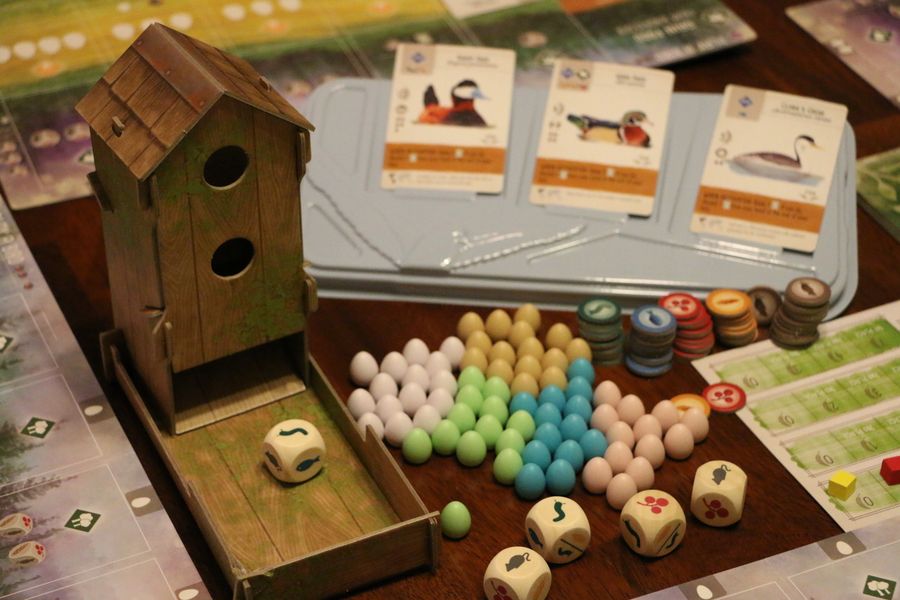 Wingspan is a competitive, medium-weight, card-driven, engine-building board game from Stonemaier Games. It’s designed by Elizabeth Hargrave and features over 170 birds illustrated by Natalia Rojas and Ana Maria Martinez. Players represent bird enthusiasts—researchers, bird watchers, ornithologists, and collectors—seeking to discover and attract the best birds to their network of wildlife preserves. Each bird extends a chain of powerful combinations in one of your habitats (actions). These habitats focus on several key aspects of growth: Gain food tokens via custom dice in a birdfeeder dice tower; lay eggs using egg miniatures in a variety of colors; draw from hundreds of unique bird cards and play them. 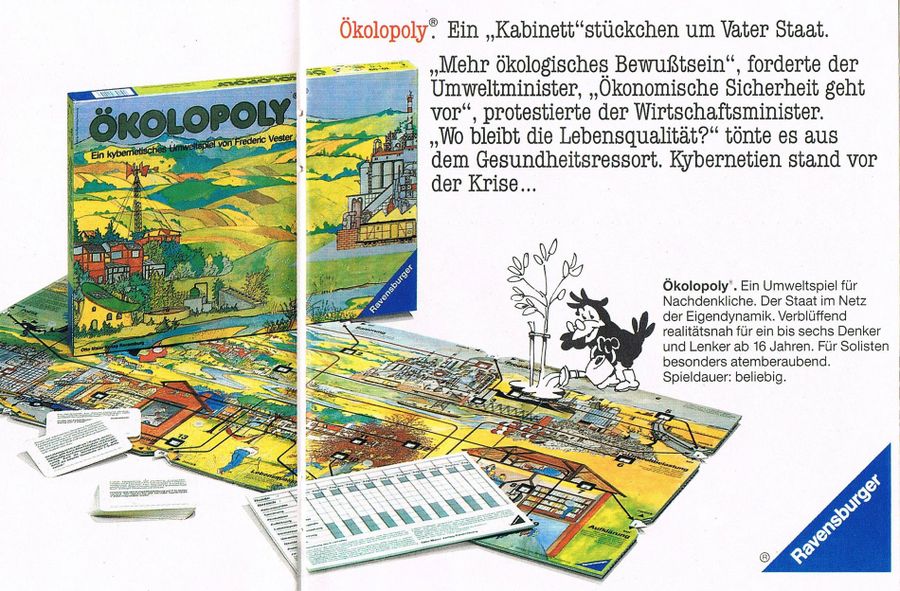 Frederic Vester designed Ökolopoly in 1980 and it was first published as a supplement in the journal Nature. At the Munich International Horticultural Exposition in 1983 it was first offered as a board game designed by Vester for the information pavilion of the Bavarian Ministry of the Environment. In 1984, Ravensburger launched Ökolopoly for the general market. While the original version had used marker stones on the tables, the final version used adjustable dials. Since 1993, players can choose between two scenarios: “Kybernetien”, an industrial nation, and “Kyborien”, a developing country. One or more players adjust 9 wheels each turn, which represent different conditions and mutually influence each other as well. 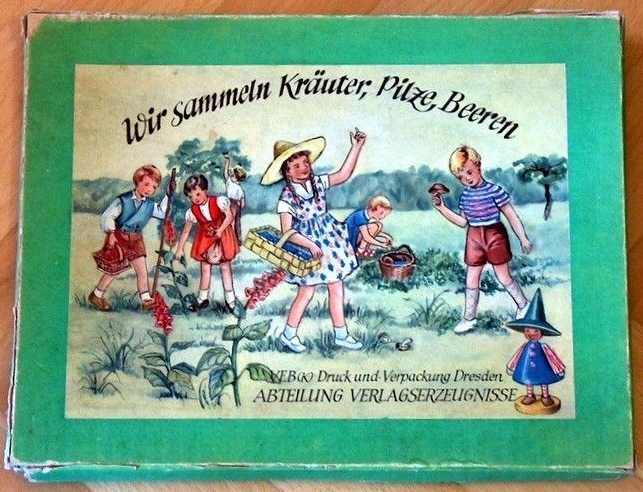 The objective of Wir sammeln Kräuter, Pilze, Beeren is to be the first to reach the target space (30); while taking turns to move across the board, players learn more about mushrooms, herbs and berries.
The instructions for the simple ‘roll & move’ game were glued into the lid; the games was produced by VEB Druck und Verpackung Dresden in the former German Democratic Republic (GDR). 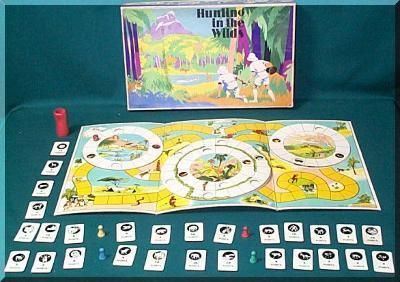 A roll-and-move board game involving Wildlife Hunting. The game features a very attractive board with three revolving sections, and beautiful period colors on the box illustration. Game components include cards representing animals and tokens representing the hunters. 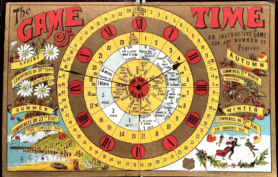 An early 20th century game with simple roll and move mechanic, that is based on the concept of seasons. Not much information is available on this game and it is quite rare. Board visuals include a circular track stylistically mimicking a seasonal calendar with the words “an instructive game for any number of players” hinting that the game aims to be educational, representing natural principles like the season cycle in abstract form.